Eye gaze is an important non-verbal cue and promising for automatic affect analysis. We propose an appearance-based method that, in contrast to a long line of work in computer vision, only takes the full face image as input. Our method encodes the face image using a convolutional neural network with spatial weights applied on the feature maps to flexibly suppress or enhance information in different facial regions. Through extensive evaluation, we show that our full-face method significantly outperforms the state of the art for both 2D and 3D gaze estimation, achieving improvements of up to 14.3% on MPIIGaze and 27.7% on EYEDIAP for person-independent 3D gaze estimation. We further show that this improvement is consistent across different illumination conditions and gaze directions and particularly pronounced for the most challenging extreme head poses.

You can also download the normalized data from here, which includes the normalized face images as 448*448 pixels size and 2D gaze angle vectors. Please note the images were saved in Maltab, and there are following pre-process to make these data can be accepted by Caffe:
new_image = original_image(:,:,[3 2 1]);
new_image = flip(new_image, 2);
new_image = imrotate(new_image, 90);
These steps switched the RGB channels and flipped the image horizontally and rotate is by 90 degrees.

This work is licensed under a Creative Commons Attribution-NonCommercial-ShareAlike 4.0 International License .

There are 15 participants and corresponding folder from p00 to p14. Each folder includes the images inside the different day folder.

There are pxx.txt file in each participant folder. which saves the information:
Dimension 1: image file path and name.
Dimension 2~3: Gaze location on the screen coordinate in pixels, the actual screen size can be found in the "Calibration" folder.
Dimension 4~15: (x,y) position for the six facial landmarks, which are four eye corners and two mouth corners.
Dimension 16~21: The estimated 3D head pose in the camera coordinate system based on 6 points-based 3D face model, rotation and translation: we implement the same 6 points-based 3D face model in [1], which includes the four eye corners and two mouth corners.
Dimension 22~24 (fc): Face center in the camera coordinate system, which is averaged 3D location of the 6 focal landmarks face model. Not it is slightly different with the head translation due to the different centers of head and face.
Dimension 25~27 (gt): The 3D gaze target location in the camera coordinate system. The gaze direction can be calculated as gt - fc.
Dimension 28: Which eye (left or right) is used for the evaluation subset in [2].

We did the leave-one-person-out cross-validation for our MPIIFaceGaze dataset, and 5-fold cross-validataion for EYEDIAP dataset [3]. The results are shown in the below figures. The left axis shows the Euclidean error between estimated and ground-truth gaze positions in the screen coordinate system in millimetres. The right axis shows the corresponding angular error that was approximately calculated from the camera and monitor calibration information provided by the dataset and the same reference position for the 3D gaze estimation task. 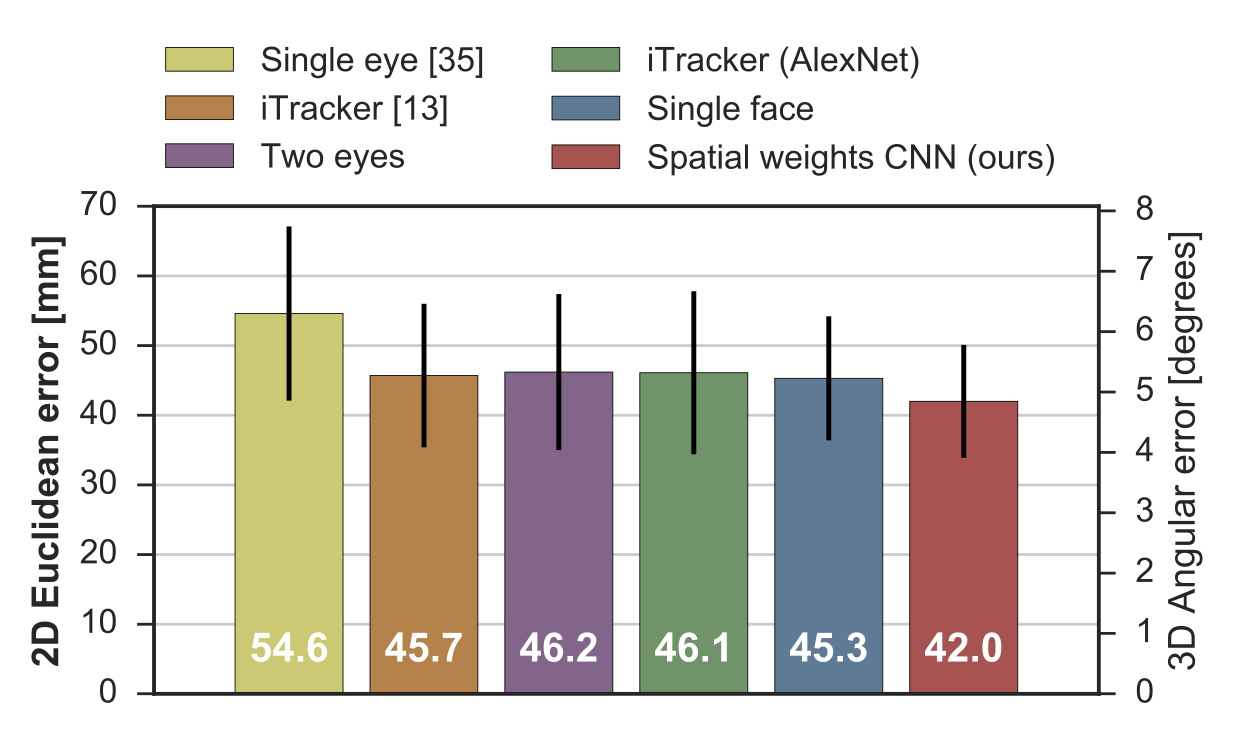 These findings are in general mirrored for the EYEDIAP dataset (below), while the overall performance is worse most likely due to the lower resolution and the limited amount of training images. 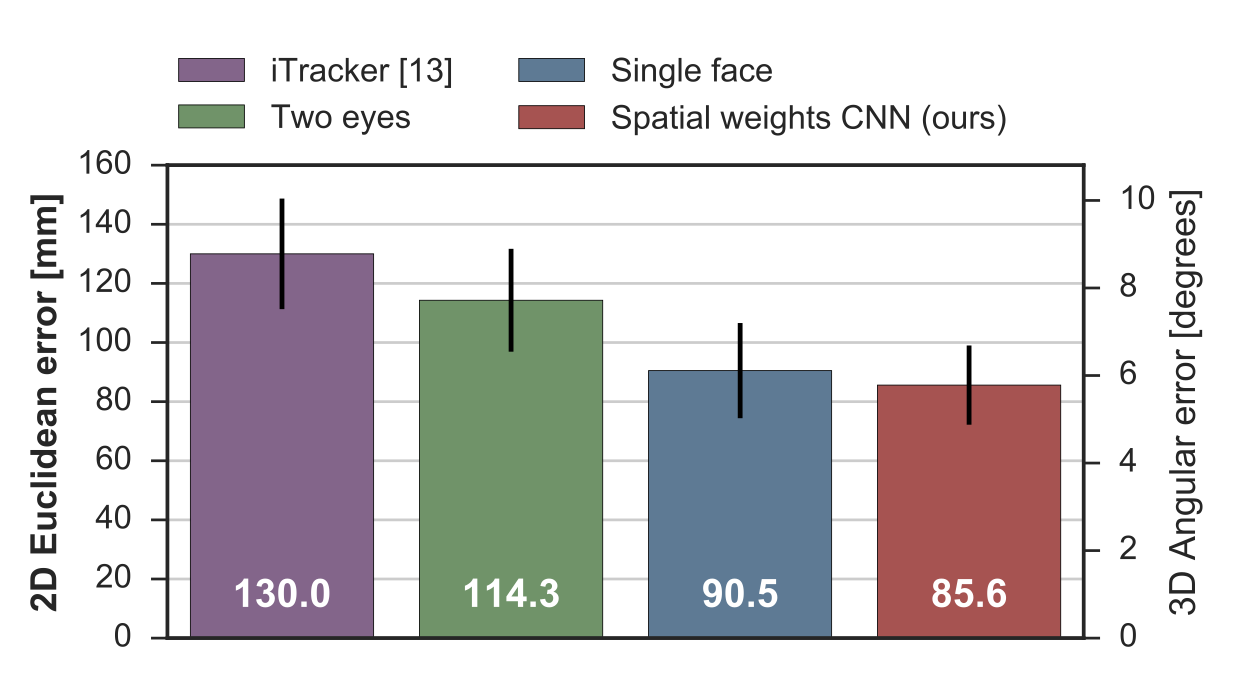 As the same setting for our MPIIFaceGaze dataset and EYEDIAP dataset, we conducted the 3D gaze estimation evaluations. The left axis shows the angular error that was directly calculated from the estimated and ground-truth 3D gaze vectors. The right axis shows the corresponding Euclidean error that was approximated by intersecting the estimated 3D gaze vector with the screen plane. For our MPIIFaceGaze dataset (below), our proposed model achieved a significant performance improvement of 14.3% (paired t-test: p > 0.01) over iTracker, and a performance consistent with the 2D case. 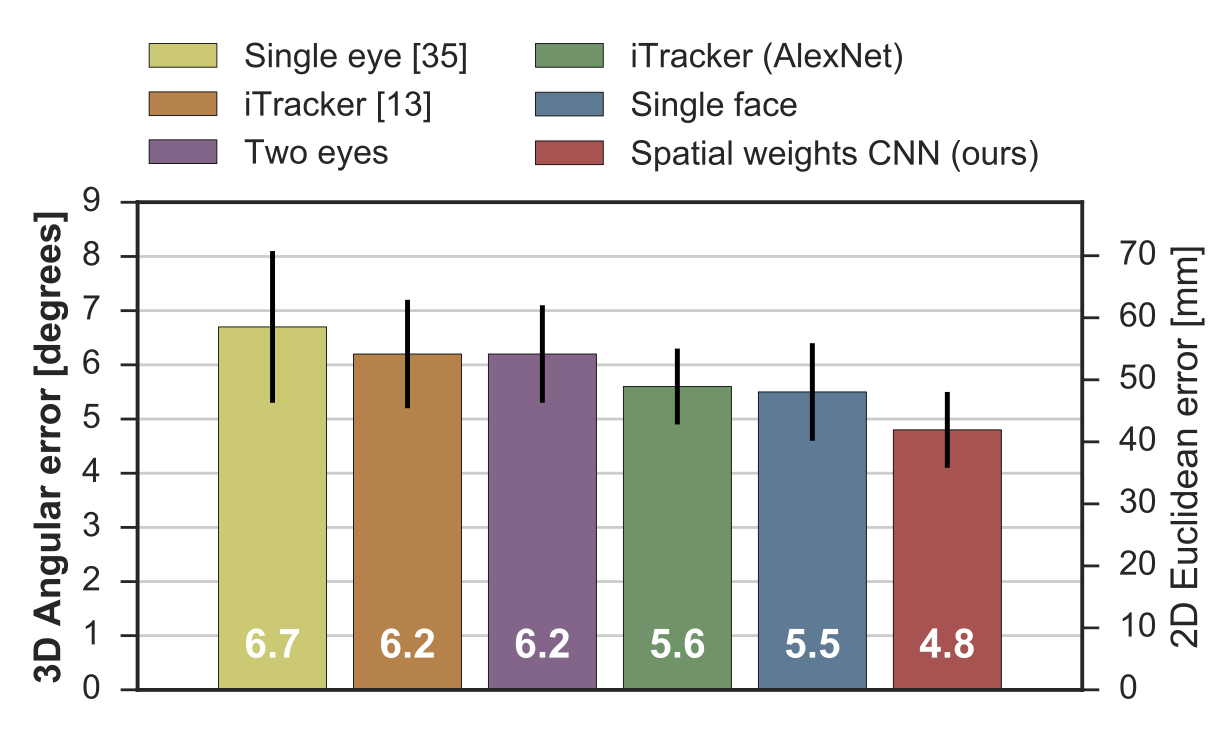 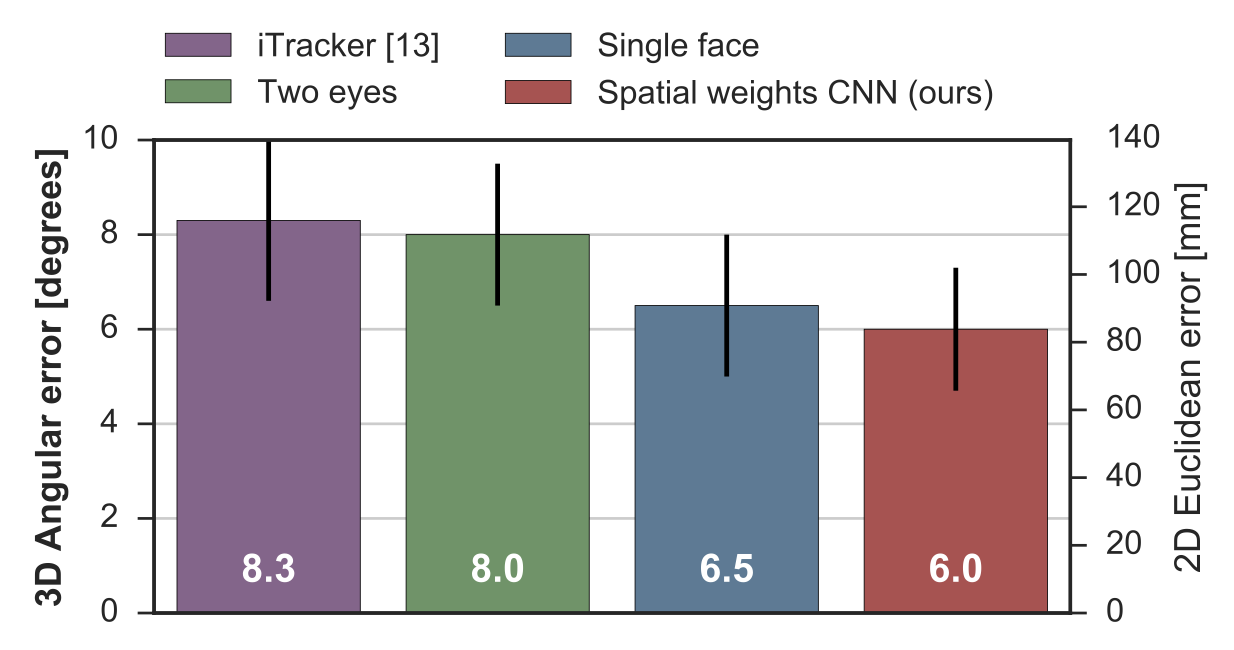